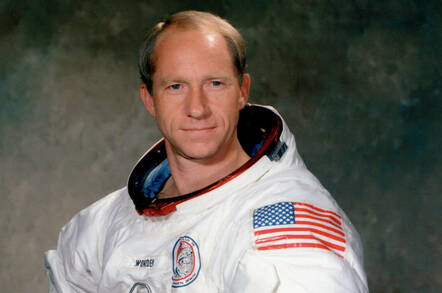 Al Worden, an Apollo astronaut who earned the title of most isolated human, has died aged 88 of a stroke.

During Worden’s 74 orbits of the moon, the Command Module reached a point 3,597km away from Scott and Irwin, and also the farthest point from Earth. That moment earned Worden the unofficial title of “world’s most isolated man”.

On the return journey he completed the first spacewalk in deep space, venturing outside the Command Module to retrieve film from a canister on the craft’s exterior. It remains one of just three deep space extra-vehicular activities. This NASA image depicts that spacewalk.

NASA’s biography (PDF) of Worden says he was born on February 7, 1932. He received a bachelor of military science degree from the United States Military Academy at West Point, then won a commission in the United States Air Force.

He rose to become an instructor at the Aerospace Research Pilots School and also graduated from the Empire Test Pilots School in Farnborough, England, before becoming part of NASA’s 1966 astronaut intake.

Apollo 15 was the first lunar mission to include a rover, returned 77kg of lunar material to Earth for study and even launched a small lunar satellite. At 12 days and seven hours, it was the second-longest Apollo mission.

Worden served in senior roles at NASA Ames Research Center until 1975, when he left the service to pursue a career in the aerospace business. He was celebrated for his career and his commitment to education. ®

Sponsored:
Webcast: Why you need managed detection and response

The white scarf on the door: a life-saving lesson from the 1918 flu

IOC considers postponing 2020 Olympics for a year after Australia, Canada drop out

Carbon-14 Spiked Worldwide Over 1200 Years Ago, And The Sun Is To Blame

A ‘pink’ supermoon is set to appear in early April, the biggest and brightest lunar event of 2020

While you’re stuck at home, here’s how to spot the International Space Station above the US