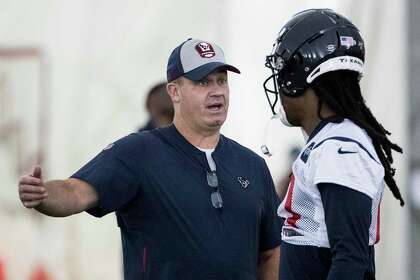 The divorce between DeAndre Hopkins and the Texans took another awkward turn Wednesday when his rocky relationship with coach Bill O’Brien was spotlighted two days after the All-Pro wide receiver was traded to the Arizona Cardinals.

Former Dallas Cowboys wide receiver Michael Irvin, a Pro Football Hall of Famer close to Hopkins, outlined an ugly rift between Hopkins and O’Brien stemming from a tense meeting between the two.

“He said, ‘Michael, it was a bit of a power struggle there,’ because he said coach O’Brien thought he had too much influence over the locker room,” Irvin said during an ESPN television appearance. “He called DeAndre Hopkins in a meeting to talk about this and kind of just hash it out. … He started the meeting with telling DeAndre Hopkins this, which blew my mind when DeAndre told me this — he said: ‘The last time I had to have a meeting like this, it was with Aaron Hernandez.’”

Irvin added that Hopkins told him it “blew my mind” that O’Brien “would equate me with Aaron Hernandez” and that the meeting “deteriorated” after that statement.

Hernandez, once a star tight end with the New England Patriots, died by suicide by hanging himself in prison after being convicted of murder. O’Brien coached Hernandez in New England.

Irvin also said O’Brien took issue with the presence of the mothers of Hopkins’ children.

“DeAndre Hopkins has a few kids from different women, and he told DeAndre that he doesn’t like his baby mamas around sometimes,” Irvin said.

A source with knowledge of the situation said the team didn’t have an issue with Hopkins’ personal relationships.

While not denying what Irvin related, Hopkins downplayed it.

“This is being blown way out of proportion,” Hopkins wrote on his verified Twitter account. “As I’ve said before, I enjoyed and am proud of my time with the Texans. I have the utmost respect for coach O’Brien and that will not change. Now, I’m ready to play for the Cardinals.”

The Texans declined to comment on Irvin’s summation of the meeting.

The Texans traded Hopkins partially because of his displeasure with his five-year, $81 million contract and his communicating through his representatives that he would hold out if he didn’t get a raise, according to multiple league sources not authorized to speak publicly.

However, the issues between Hopkins and O’Brien ran much deeper. There was friction between Hopkins and O’Brien for years, according to multiple team and NFL sources. Hopkins was extremely durable as far as being able to play on Sundays. He played through several lingering injuries, including to his knee, foot, thumb, toe and ribs, and his participation in practice was very limited during the season.

The Texans had previously made Hopkins available for a trade and had been actively attempting to deal him since the end of the season, when the team communicated privately it could move on from the South Carolina native. The Texans also held discussions about Hopkins with the Philadelphia Eagles, Cincinnati Bengals and Patriots, according to sources.

Although Hopkins caught 104 passes for 1,165 yards and seven touchdowns in 2019 and was named All-Pro for the third consecutive year, it was a strange final season for him in Houston. Several sources said O’Brien was tough on Hopkins and highly critical of him behind the scenes while continuing to praise him publicly.

Lauri Markkanen would rather play elsewhere if there aren’t major changes to Bulls’ plan, per report